Summer is definitely my favourite season. I don’t know if it’s because I was born in July, but there’s something about the feeling of the sun beating down on warm bare skin, long light evenings and leaves on the trees that makes me inherently happy. Summer food is pretty good too. I’ll take alfresco eating, beautiful ripe fruit and salad over stew any day, and don’t even get me started on the joy of frozen desserts – bowls of soft, sweet ice cream and melting scoops in cones, icy granite with shots of syrup and silky sorbets best enjoyed on a hot hot day.

However – like a lot of good things – summer inevitably comes to an end, and despite this recent bout of freakishly warm weather (please let it last!), it feels about time to welcome in the autumn.

And what better way to celebrate the start of a new season than through food? While the colder weather and lack of sunshine might make me grumble, there’s no denying certain foodie pleasures that arrive with the onset of autumn; chestnuts and pumpkin, incredible English apples, fresh crab, local game and beautifully ripe figs.

This is the theme of the September – and my first ever – Mac Attack challenge; macarons of the season. Invented as a virtual kitchen by two (very talented) macaron-loving bloggers, Mac Tweets is a monthly challenge inviting participants from across the blogosphere to submit their recipes around a certain theme. The entries are seriously impressive – think miniature macaron burger buns, cocktails, ice cream sandwiches and every flavour under the sun – but inspiring rather than daunting; this is a place to share advice, learn new techniques, bounce around ideas or simply marvel at others’ creations. 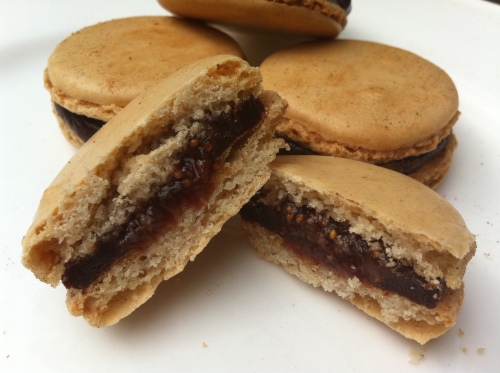 When choosing flavours for my first ever Mac Attack, fig felt like a bit of a no-brainer. These lusciously plump fruit are in season for such a short time, and so transitory a pleasure, that they seem to perfectly represent the changing of the seasons and the arrival of autumn. Being my first ever challenge, I didn’t want to play around with the consistency of the shell too much by introducing large amounts of liquid or flavouring, so I stuck with my basic tried and tested recipe, adding just a teaspoon of cinnamon for an autumnal tone.

Figs have a naturally high sugar content so work wonderfully when reduced down – perfect for fig jam or (Carniverous Boyfriend’s favourite) fig rolls. Rather than using them fresh which I feared might make the macarons go soggy, I heated the chopped figgy flesh with water and a little brown sugar, bringing everything together in an intense sticky syrup. Finding it hard to make a sweet without including some form of chocolate, I then mixed together a dark chocolate ganache with a little cream and butter, adding just a touch more cinnamon to bring out the flavour in the shell. With a blob of gooey jam, a ring of creamy chocolate and the crispy crunch of the cinammon shell, my first ever Mac Tweet macarons were complete.

Summer might be the season I love the most, but with treats like these to keep me going, autumn isn’t looking too bad either. What’s your favourite season? And what flavours would you like to try in your next batch of macarons?

For the macaron shells (from Ottolenghi, The Cookbook)
(makes approx 20)

Preheat the oven to 170 degrees C/Gas Mark 3. Sift together the icing sugar, ground almonds and cinnamon in a large, dry bowl.

Place the egg whites and caster sugar in a separate bowl and, using a hand-held whisk, whisk on full speed until a thick, aerated meringue forms.  It should be firm, but not too dry.

Take a sheet of baking parchment ans ‘glue’ it to your baking sheet using tiny dots of the macaron mixture. Fill a piping bag with the macaron mix and pipe tiny, shallow discs onto the sheet, slightly spaced apart. They should be approximately the size of a two pound coin.

Tap the tray vigorously on a flat surface to help level out the mixture and leave for minimum 30 mins. This will help the macarons develop their trademark shell.

To bake, pop the tray into the oven and leave for 10-12 mins. The macarons are cooked when you can lift them easily from the tray with a palette knife and the top is firm, but not coloured. Remove from the oven as soon as they reach this stage so they don’t overcook, and leave aside to cool completely.

For the fig jam

Put all the ingredients in a small saucepan and bring to the boil. Allow to bubble and reduce until you have a thick, sticky syrup with a texture like jam.

For the chocolate ganache

To assemble the macarons

Drop half a teaspoon of fig jam into the centre of one macaron shell. Pipe a ring of dark chocolate ganache around the fig jam, then top with another plain macaron shell. Pop in the fridge to firm up – these are best eaten at least 6 hours after making to allow the flavours to concentrate and the macaron to meld into a crispy, chewy treat.