Black. Not a colour we necessarily associate with wonderful food. Especially those of us who are keen bakers where, unless you’re talking black treacle, black bottomed cupcakes or black cherries (of which I’d argue the latter are really brown and purple respectively), black tends to signify something that has been in the oven too long; in other words burnt.

Try to think of a black food and you’re likely to conjure one of two ends of the culinary spectrum. In the losing category come the burnt items; over baked bread, lasagne left in the oven too long, black bits of onion in a pan that should be caramelized or the singed tips of an otherwise snow-white meringue. At the other end of the scale, black seems to signify something altogether more luxurious; tiny pearls of caviar, dusky black truffle, exotic black garlic or the supposed aphrodisiac qualities of a stick of licorice. 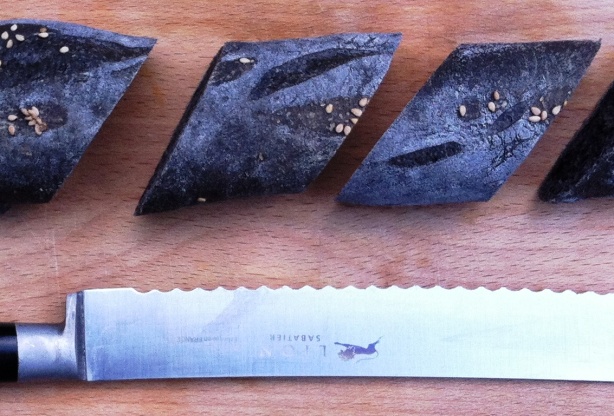 In the Bocca di Lupo cookbook, Jacob Kennedy goes one step further and suggests that ‘there is something dangerous and sexual about black food’ as ‘without colour we are blindfolded’. While I’m not going to go quite as far as Jacob – we’re talking basic bread here, not the seductively silky, jet-black  risotto that resides in his restaurant or recipe pages – I definitely agree that changing the colour of what you’re eating confounds the senses.

Black bread, in its most recognized form, is a Russian pumpernickel. Made with upwards of ten ingredients including rye, molasses, brown sugar, caraway and cocoa, it tastes exactly as you’d expect from such ingredients – earthy, rich, coarse and wintry, best enjoyed with a scrape of butter, a sprinkling of caviar and a shot of vodka. In contrast, the squid ink baguettes below are an altogether lighter, crisper experience. Apart (of course) from colour, the squid ink imparts little flavour (as you’ll find with dried pastas made with squid ink, spinach or beetroot), lending only a slight softness to the crumb which could, in fact, be because of the olive oil I mixed with the ink at first.

The lack of any huge distinction in flavour from a normal baguette is confusing. And while I wasn’t sure these baguettes would lend themselves especially well to some of the ingredients you’d pair with a nutty dark rye – smoked salmon for example – I was aware that the charcoal black colour needed something bright and full of flavour to lift it off the plate. Thinking of both heat and colour, I opted for a chilli butter.

Recently I’ve been enjoying watching The Fabulous Baker Brothers on TV.  For all its flaws – the brothers’ constant chipper chat, some seriously over-staged challenges and their attempts be just that little bit cooler than they actually are – the programme is definitely a good thing. It makes cooking feel accessible and exciting; interesting enough to offer something new, yet easy enough to give it a go at home. And the brothers are clearly both talented and passionate about what they do. So, when I saw them make homemade butter to accompany some bread on the series, I decided to give it a go.

To be completely honest, unless you’ve got the most luscious cream, fresh from the cow and full of flavour, this exercise is a bit of a gimmick. I can’t imagine the cost of cream compared with butter in your average supermarket has very much in it, and in a blind taste test with no additional added flavours, it’d be pretty hard to tell the difference between this kind of homemade butter and something shop bought. But it’s fun. It’s something new. And it gets people excited about food again, experimenting in the kitchen and enjoying what they eat. Which I guess sums up the whole ethos of the Baker Brothers series really. 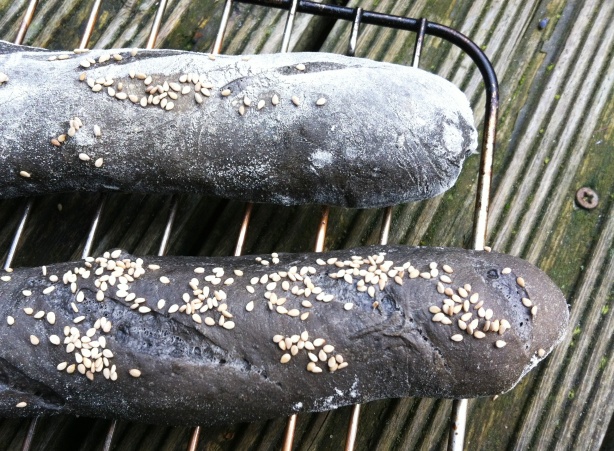 So here you have it, squid ink and sesame baguettes with a slightly salty harissa butter. The baguettes aren’t quite as dark as I’d hoped because I only had a small sack of squid ink, but I’ve adjusted the recipe below to include a more suitable quantity. I freeloaded mine from the local fishmonger who keeps the slightly scary and gelatinous little sacks of ink in her freezer, but you can also buy sachets of the stuff online which would make it easier to weigh and is probably slightly more appealing to those of a squeamish disposition.

One final word of warning – make sure the bowl of your stand mixer is firmly locked in place when churning your butter. When making mine I somehow managed to leave it slightly loose, meaning that at around the four minute mark my butter began to swirl at an alarming rate, slopping buttermilk all down the sides of my kitchen cabinets. Not very pretty, or fun to tidy up, but I guess at least it wasn’t squid ink . . . 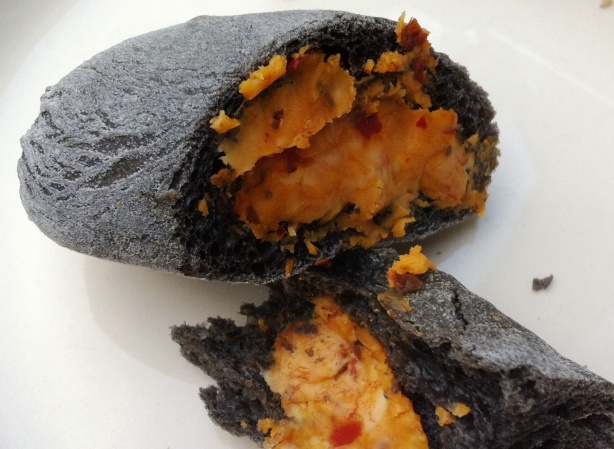 Put your flour in a bowl and crumble in the yeast followed by the salt.

In a separate small bowl, mix together your squid ink and olive oil to form a shiny black paste. Mix your paste, plus the water, into your flour and bring together into a sticky dough. Knead by hand or in a stand mixer until your dough is stretchy, elastic and no longer sticky. Cover and leave for about one hour, or until doubled in size.

For details on how to shape your baguettes, see my previous post here. When ready for the oven, slash the tops then wet slightly and scatter with your sesame seeds.

Bake until the crust is nice and crispy – you’ll need to use your smell and touch for this one as these baguettes don’t really take on your standard golden baked baguette colouring!

For the butter (adapted from The Fabulous Baker Brothers book)

Beat the cream fast in an electric stand mixer until the sound changes and it separates into curds of butter and buttermilk This will take between 5 – 7 minutes and will be very obvious when it’s ready – the butter forms into a big lump round the mixing attachment.

Sieve the curds over a big bowl then plunge into very cold water to draw any remaining milk out. Firmly squeeze the curds together underwater to make a rough ball of butter.

The amount of salt you need to add varies slightly depending on the final weight of your butter – a good guide is to weigh your butter then add 2% of this weight in salt. I used a good handful of sea salt flakes and a few big teaspoons of harissa. Simply mash together with the butter in a bowl until evenly distributed, then shape the butter into little pats, wrap in greaseproof paper and the job is done.

This recipe makes a fair bit of butter but do feel free to freeze it. You could also make a variety of different flavours – garlic and parsley, tarragon, rosemary, fresh chilli and ginger all spring to mind.

Enjoy you baguettes fresh from the oven, the crispy crust and warm crumb spread with a thick smear of melting harissa butter. We ate ours to accompany dinner with my parents. As there were some leftovers, I sent my Mum away with a couple of baguettes in her handbag, which they assure me were delicious reheated the next day for breakfast with some soft goat’s cheese, avocado and tomatoes.