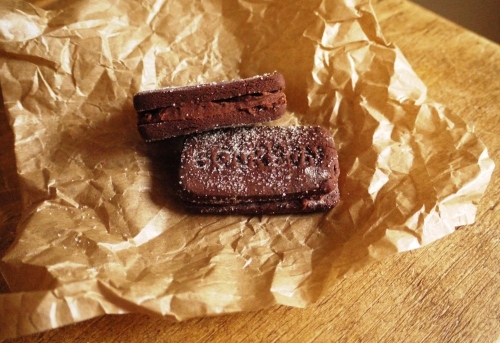 Bourbon biscuits . . . with a hint of the strong stuff

When it comes to biscuits (of the British variety, not their soft, scone-like American counterpart), some brands do exactly what they say on the tin, while others are a little more elusive with their identity. Custard Creams are sandwiched together with – you guessed it – a layer of custardy cream, Jammy Dodgers filled with jam, and while their abilities to aid the breakdown of food may not be proven scientific fact, there is something soothingly simple about a plain Digestive biscuit that more than justifies its name.

The origins of other biscuit names are a little less obvious. The Garibaldi, or squashed fly biscuit, was named after an Italian general for whom it was created as part of his war rations; coconut flavoured Nice biscuits are named not for being the rather bland opposite of ‘nasty’, but after the city in Southern France; Hob Nobs get their name from an old expression meaning ‘to take a drink together’ – perfect for this traditional accompaniment to tea – and Bourbons, created by the same Bermondsey biscuit company as Garibaldis, were named after the Royal French House of Bourbon. Not after the alcoholic drink. 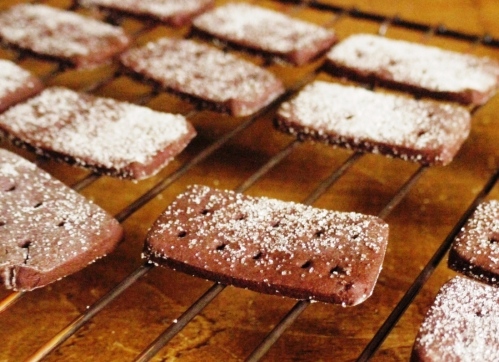 This weekend just gone, Carnivorous Boyfriend headed up to Yorkshire to see some friends. It’s a trip he does on a fairly regular basis, and if I’m not going with him, I like to send him up with something sweet to spread a little loaf love around the North of England. On previous occasions I’ve made brownies, Millionaire’s Shortbread and even a box of Homemade Ferrero Rocher, all of which get packed into Carnivorous Boyfriend’s bag along with a big bottle of bourbon, the boys’ favourite drink whenever they get together. So this time round I decided to try to combine the two and incorporate a little of this tipple into whatever I baked for an altogether more grown up treat.

After reading a feature on homemade biscuits in the latest issue of Jamie magazine, I had my recipe. A basic Bourbon biscuit is a lovely thing: two thin oblongs of crisp dark chocolate biscuit sandwiched together with chocolate fondant filling for an altogether more elegant – and much more chocolaty – version of an Oreo. However if you want to take it to a much more exciting – and totally un-child friendly level – add a splash of bourbon to the chocolate cream. Chocolate and alcohol, sweet and strong, crispy and smooth: the Real Bourbon biscuit is born. 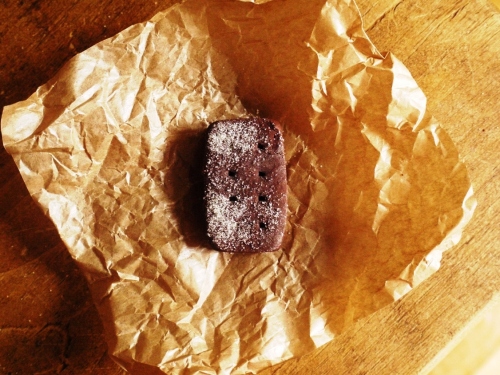 These rich, chocolaty treats are for adults only

Making these biscuits couldn’t be easier. A simple dark chocolate dough is mixed in minutes before being rolled out thin and sliced into little rectangles. A sprinkling of golden caster sugar adds crunch before they are baked then sandwiched together with a rich chocolate ganache, stirred through with just a scant teaspoon of bourbon. If you’re not as into booze as the boys I was baking for, you could always replace the bourbon with a little milk, or experiment with coffee, orange or mint. But if you like a little hit of alcohol alongside your chocolate, do try the recipe just as it is, if only to see the smiles on peoples’ faces when you present them with a Bourbon biscuit made with real Bourbon.

For the biscuits
Preheat the oven to 150 degrees C. Line a baking sheet with non stick baking paper.

Cream together the butter and brown sugar until light and fluffy. Beat in the golden syrup, then sift in the flour, cocoa, salt and bicarbonate of soda and beat to combine. Add a little milk, a few drops at a time, until a soft, even dough is formed.

Turn the dough onto a floured surface and knead for about one minute. Roll into a rectangle about 3mm thick then cut into 24 even rectangles, approx. 5cm x 3cm. Dot holes into the dough with the end of a skewer (or any other pattern you like), then sprinkle with the caster sugar and transfer to your prepared baking sheet.

Bake for 8 – 10 minutes, then remove from the oven and transfer to a wire rack to cool.

For the filling
Cream the butter until light and fluffy, then add the icing sugar and cocoa powder and continue to beat until combined. Beat in the bourbon.

To assemble the biscuits, take a heaped teaspoon of chocolate bourbon cream and spread over the underside of one biscuit, smoothing right to the edge then sandwiching together with a second biscuit. Repeat until all your biscuits are filled, then store in an airtight container.