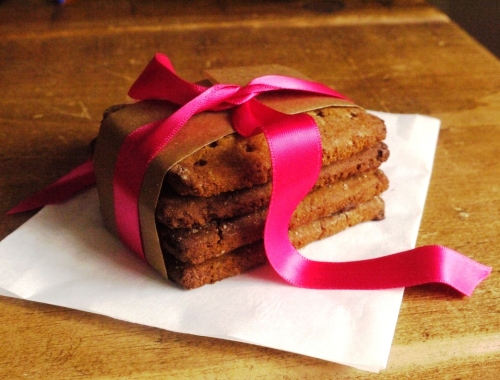 Sweet, crisp & rich with dark brown sugar – a homemade version of the US staple

When we were little, one of my brother’s best friends was Canadian.

Coming from another country, there were numerous things about this boy which we found fascinating: his Mum made incredible chocolate chip cookies on a regular basis (I’ve explained before that mine was more of the raisin and apple offering inclination); his family had a BBQ the size of a small car in their back garden (which they’d brave even in winter weather to cook the most incredible slabs of meat on); at nine years old his school had never allowed him to use a knife to eat with (bizarre, but true).

Another source of intrigue was his accent. Being British, southern and lacking in any discernable or exciting accent to call our own (to my ears anyway), we loved hearing the way he’d pronounce certain words, and would often try to get him to attempt an English accent. Perhaps not the most exciting form of entertainment ever invented, but we were only little and, as an alternative to eating apples or raisins (see above), it was probably pretty appealing.

One word which caused a huge amount of confusion was the name of his guinea pig. A tiny, furry fuzzball with long white hair and a piebald patch over his eye, this pet was affectionately known as ‘Hairy’ on account of his, well, hairiness. It made complete sense, and might well have earned him a place in the hall of inspiring animal names alongside Hammy the hamster and Goldie the goldfish. Except his name wasn’t ‘Hairy’. He was ‘Harry’, and just happened to have an unfortunate amount of excess hair. And an owner who’s accent we couldn’t quite understand.

Described as similar to digestives, graham crackers have their own unique flavour

Graham crackers aren’t that common in the UK. While our American counterparts use them as a cheesecake base staple, we have the humble digestive and, while comparisons are often made between the two, they have some fairly crucial differences in taste, texture and flavour. Rather than being made with oats and wholewheat flour, graham crackers substitute oats with ‘graham’ flour, which you could be forgiven for thinking was chickpea (or ‘gram’ flour) if you’d ever heard it pronounced in an American accent. Now you see where I was going (or trying to) with the whole Hairy/Harry guinea pig thing.

Graham flour is a high protein variation made from unbleached wheat flour mixed with coarsely ground wheat bran and germ. Graham crackers, the vehicle which arguably made the flour famous, were – like the British Bath Oliver – originally conceived as a health food of sorts. And although the sweetened, honeyed versions people now use to sandwich together S’mores and cement the base of cheesecakes are probably not quite what the original inventor intended, they are pretty popular around the world. 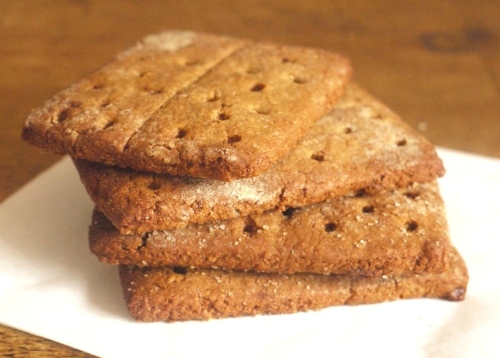 Having never seen a packet of graham crackers in the shops over here and wanting to know what all the fuss was about, I decided to make my own. As I’ve discovered with these homemade digestives and these ‘real bourbon biscuits‘, homemade versions of these shop-bought favourites are often even more delicious, and having seen some beautiful pictures here and here, I didn’t doubt that these would live up to expectations.

Unfortunately this weekend I wasn’t able (read patient enough) to get my hands on some graham flour, but I’m assured by a number of online recipes from pretty credible chefs that whole wheat flour is an (almost) acceptable substitute in times of need. To mix things up a bit, rather than using all whole wheat, I threw in some nutty buckwheat flour from a packet I’ve been wanting to use up.

These should probably be a little thinner – but tasted delicious nonetheless

Eat these lovely little biscuits for breakfast. Dunk them in a cup of tea. Go all-American and sandwich them round toasted marshmallows and melting chocolate or crush them up with butter for the ultimate biscuity base. Just don’t get them out of a packet – homemade is so so so much better.

Pulse together the flours, brown sugar, baking powder and soda and salt in an electric stand mixer fitted with the paddle attachment. Alternatively you could do this in a magimix. Add the butter and pulse until the mixture resembles coarse breadcrumbs.

Line two baking sheets with parchment paper. Dust the worksurface with flour. Take your dough out the fridge, remove the cling film and roll out into a long rectangle less than half a centimetre thick (about 0.3cm). Trim the edges and cut into rectangles about 10cm by 5cm. Place your rectangles onto the baking sheets and chill one hour further.

Preheat the oven to 175 degrees C. Remove your crackers from the fridge. Mark a vertical line down the middle of each cracker then, using a cocktail stick or skewer, prick little dots either side of the line. Sprinkle with the topping if using, then bake for about 20 minutes or until golden brown and fairly firm to the touch. Remove from the oven and cool on a wire rack before storing in an airtight container.