When I was younger, owning a drinks cabinet felt like the sort of thing I’d do when I became ‘a proper grown up’. Rather than purchases for a specific purpose, wine bought with only immediate consumption in mind or the bottle of booze that inevitably gets polished off at a house party – if only by some random stingy student that a friend of a friend invited – I loved the idea of a proper wine cellar and being able to choose from my very own wide selection of spirits.

Now in my late twenties, like a lot of the Peter Pan generation around me, I have to admit that I don’t quite feel like a ‘proper grown-up’ yet. I have, however, succeeded in starting to build the bottle bank of which I once dreamed. It helps that my parents are more than a little obsessed with wine (in both a working capacity and for pleasure rather than an alcoholic sort of way). They often give us new things to try, keep us updated on the most interesting offers around or offload a case of a favourite wine they just haven’t got around to drinking.

We’ve also managed to accumulate slightly less cohesive collection of spirits over the last couple of years: bright orange Aperol (an ingredient in my all-time favourite aperitivo, Spritz), Green Ginger Wine (a Christmas essential), various bottles of bourbon (a Carnivorous Boyfriend – sorry, Fiancé – special) and one of Frangelico which works wonders in baking but is far too sickly sweet to drink on its own (to my taste anyway).

One of these boozy little squares is never enough . . .

Other than the occasional gin and tonic or a really well made cocktail, I don’t tend to drink a lot of spirits. But in the same way that I don’t drink coffee but love it in sweets and desserts, I find a lot of alcohol really comes into its own when used in baking.

Bourbon is one such example: something on which I’m really not keen served as a straight alcoholic drink but which I absolutely love the flavour of when softened with sugar and mellowed with baking essentials such butter or cream. One of my favourite ice cream flavours ever is David Lebovitz’s butterscotch pecan (recipe here) where the addition of a little bourbon softens the texture, the alcohol adding a wonderful adult dimension and heightening the sweetness in an utterly addictive way. 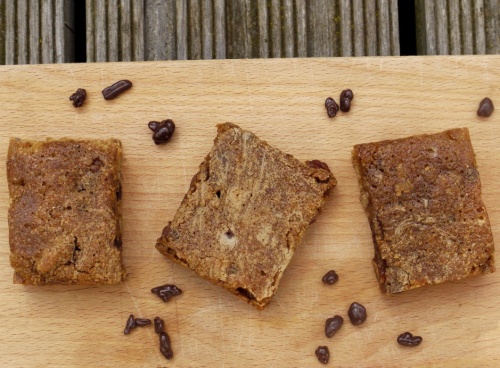 Be careful not to overbake these treats to ensure the moist, squashy centre

This Friday just gone, Carnivorous Boyfriend’s (not so) little brother was coming for supper.  Wanting to make something suitably boy-friendly, I bought a four-finger thick slab of T-Bone steak to rub with garlic and rosemary, glance on the BBQ and serve in thin, bloody slices. For pudding I had hoped to make that favourite butterscotch pecan ice cream, but if you read my most recent post you’ll know that my machine is currently back with the manufacturer after suffering a severe malfunction.

So I decided to improvise, building on the blocks of butter, sugar, pecans and that all-important magic ingredient, bourbon. Taking inspiration from this ice cream, these blondies and this book, I experimented in the kitchen. My experience with brownies made me cautious about baking times. Having just bought some chocolate covered cocoa nibs, I knew they had to go in. The recipe on this beautiful blog convinced me to up the amount of bourbon. And the result is these salty bourbon pecan squares: part cookie, part blondie, part cake, all-consumingly crunchy and laced with booze.

Better than a brownie? The ultimate grown-up treat

If you like bourbon, you’ll love these. If you don’t like bourbon, I bet you’ll love them too. And if you’ve got a bottle sitting in a drinks cabinet somewhere just begging to be sloshed into a squidgy bourbon slice, you’re definitely grown up enough to give them a go.

Spread the pecans on a baking tray and sprinkle with salt. Bake for 8-10 minutes until toasted and a wonderful nutty aroma emerges from the oven. Remove and set aside to cool then roughly chop.

In a medium saucepan, melt together the butter and sugar until the sugar crystals have all dissolved. Remove from the heat and allow to cool slightly.

In a separate bowl, whisk together the flour and baking powder.

Beat the eggs into the cooled butter and sugar mixture. Stir in the vanilla and bourbon followed by the chopped pecans and cocoa nibs.

Spoon the mixture into your prepared tin and bake for 14-18 minutes until an inserted skewer comes out just about clean. Less time and they will be more squidgy, more and they may become too cakey, so keep an eye on them if your oven is a little temperamental.

Remove from the oven and allow to cool before slicing into squares. Serve as they are, or with a big scoop of vanilla ice cream and caramel sauce for the ultimate indulgence.