How many times have you wanted to bake something only to be thwarted by a store cupboard shortage or lack of ingredients in your local shop?

This post is less of a recipe than a series of ideas and suggestions around a theme. While making drunken plum tart several times over Christmas, I fell more than a little in love with frangipane and have been looking for other ways to use it ever since. Previously I’d associated frangipane with the sickly sweet almond filling you often find in croissants – a heavier, altogether different beast from the light, sweet simplicity of the version I made at home. With a new-found favourite and a new technique added to my baking repertoire, I was keen to get experimenting. 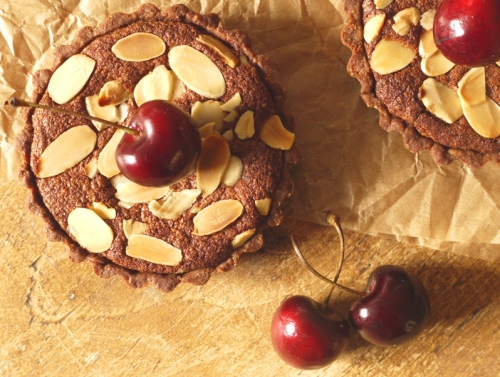 After seeing this recipe over on one of my favourite baking blogs, I knew that chocolate frangipane had to be next on my list. In the original version cocoa powder is used, but I wanted to try out melted chocolate to see how it affected the texture (and because, well, I love melted chocolate). I also decided to swap out the sliced pears for cherries, not quite ready to let go of the winning combination of sweet, tart stone fruit and folds of frangipane I had so adored in that original plum tart.

Early on Saturday morning I made my pastry, adding a little almond flour for texture and cocoa for richness (and to echo the flavours of the frangipane with which I would fill it). My tartlet cases baked, I used a wooden spoon to beat a velvet bowl of almond frangipane before stirring in a glossy slick of melted chocolate. Chocolate frangipane sitting on the side, I headed out to the shops to pick up a punnet of cherries for my filling.

Fresh cherries are, well, the cherry on top

Of course cherries aren’t in season at the moment, something I’d completely ignored in my excitement at the idea of this chocolate-cherry combination. I returned home empty handed and, impatient to get on with the task at hand, decided to bake up my tarts without any fruit, simply scattering a few flaked almonds over the smoothed-out frangipane.

The resulting tarts were lovely, but felt somehow incomplete. Similar in ingredients to a flourless chocolate brownie but with near equal quantities of butter, sugar, chocolate, almond and egg, the frangipane bakes up to a texture that is both light yet solid, rich without being overly chocolaty. It’s delicious, but takes on another, incredible dimension when given the contrast in flavour and texture provided by slices of pear, cherry or another type of fruit.

On Sunday, I went against all my principles and bought a bag of cherries from Chile (the ones you can see in these photos). In spite of the appalling number of air miles, I can confirm that they worked wonderfully stoned and eaten with the chocolate tarts, so while the recipe below is what I actually baked, I’d highly recommend using it as a starting point only. Stud some stoned cherries into the batter before baking, layer it with pears or if you really can’t find any fruit, try a little layer of jam underneath the frangipane. Different nuts would also be amazing – try swapping out the almonds in both crust and frangipane for pistachios or hazelnuts, both perfect partners with chocolate.

Most of the recipes I post in this space are tried, tested and loved. While these tarts are tested in their most basic form – and certainly loved for their chocolaty flavour and crisp, nutty pastry – this post is also intended as a springboard for you to try something new. If you come up with any alternative flavour combinations, I’d love to hear about them. I’ll definitely keep experimenting and keep you up to date with mine.

Ingredients:
For the pastry

Method:
For the pastry

Sift the flour, icing sugar and cocoa into a medium-sized bowl. Add the cubed butter to the bowl and rub with your fingers until no lumps are left. Stir in the ground almonds.

Loosely beat the egg yolk and cold water together then mix into the butter and flour mixture until you have a soft dough.  Wrap in cling film and put in the fridge for an hour to firm up.

Remove the pastry from the fridge 5 minutes before you want to use it. Divide the dough into eight equal portions. Flour the work surface and roll one portion of dough into a thin round. Line an individual, loose bottomed tartlet tin with the pastry, trimming off any excess around the rim. Repeat with the seven remaining tins (or, if like me, you only have four, freeze half the dough), then prick the base of each tartlet and pop in the freezer for an hour.

For the frangipane
In a medium bowl, beat together the butter and sugar until light and creamy. Add a quarter of the ground almonds and a quarter of the egg, beat until combined then repeat until all the almond and egg is incorporated.

Stir in the melted chocolate until the mixture is completely smooth then spoon into the pre-baked tartlet cases so that they are approximately two-thirds full.

Scatter with flaked almonds then bake for 15 – 20 minutes until the frangipane has puffed up slightly and feels set to the touch. Remove from the oven and allow to cool slightly before topping with fresh cherries and serving.